I’m going to make an argument that you need to view sexy images in your mind or on your computer EVERY day. 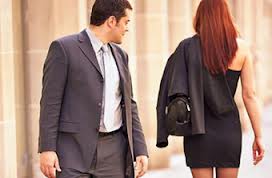 What I am advocating is a scratch of that strong human male urge to look at the female form.

So say YES to a glance or two at an image that turns you on.

And NO to a ninety minute wank session in front of your computer that will do nothing but suppress hormones over the long run.

Ideally you’ll create these images in your mind…but the computer in moderation will do until you perfect your visualization skills.

Just think back to your days as a 17 year old where your brain was constantly occupied with any and everything female, (think spontaneous erections, wet dreams, etc..).

Your job is to take your mind back to that place right before you go to bed at night, and as soon as you wake up in the morning.

A primate study found that males who viewed sexually active females experienced up to a 400 percent jump in testosterone.

That number right there will compete with 250 mg’s of injected testosterone, so don’t take it lightly.

In another study, German researchers discovered that just achieving an erection is enough to send testosterone levels climbing.

This explains why I recommend you NEVER crawl out of bed in the morning without achieving hard wood first.

If you don’t wake up erect, get things going manually to ensure you get that erection fueled early morning T-Boost.

You should always have a novel sexual event out there on the horizon as well…something unique, unusual and exciting for both you and your partner.

This can be achieved by switching up locations, positions, techniques, adding props, toys, clothes. etc…the possibilities are endless.

This will get the powerful sex hormone dopamine fired up along with your testosterone, which will heighten your sexual experience dramatically.

Anything new, unusual, risky or novel will get that dopamine rush going, so make it a point to work that angle.

And as you head down this hormonal highway always remember that your primary job, according to mother nature, is to impregnate females.

I can hear all you men applauding now.

You can argue this point until the cows come home, but this is what you as a man are designed to do.

If you’re still not clear on this point, drop your shorts and take a quick peek at the baggage hanging between your legs.

Your penis is longer and thicker relative to body size, than almost every other species on planet earth, and for good reason.

Sure, we’ve developed our complex – sophisticated brains, and can enjoy things like Shakespeare…but if a beautiful woman walks in the room, that big brain of yours shifts right down between your legs instantly. My point here is, pursuing females and the sexual potential they all put on display is a huge part of your genetic makeup.

As a matter of fact, as soon as food, water and oxygen are taken care of, sex is pretty much it!

And the sooner you stop fighting this very normal and natural impulse…the happier you’ll be as a man.

Sex is good, sex is great, sex is what ALL men appreciate!!!

Think about something sexual that your girl has politely refused in the past, then write down a plan to make it happen (with her eventual consent of course).

Lay out all the details right down to where, when and how.

Begin to execute this well thought out plan, and I guarantee you…you’ll be seeing them aplenty.

Here’s another tip for you…start having sex in the morning, unless your testosterone levels are 300 or less.

If you’re sub 300 you’re going to have to limit sexual activity to twice a week at the most.

(Sorry boys, but deep down you know I’m right).

And I’d advise all sub 300’s to never engage in sexual activity first thing in the morning, unless you want to walk around like a wet blanket for the rest of the day.

Because your suppressed T levels will ensure that you’ll release an excessive amount of the hormone prolactin after you ejaculate.

And prolactin is the hormone that brings on that “after ejaculation fatigue” that can hit a man hard after the fun has stopped.

Combine this with the fact that excess prolactin has a testosterone suppressing effect, and you’ll see why you need to hold fast with this recommendations for the time being.

So limit morning sex until you get your testosterone levels back up into the 400 range, minimum.

But for everyone else, that morning romp will definitely send you some hormonal goodness… We already know that T levels will climb, but DHEA will rise by a factor of 7 just before orgasm, and will remain elevated long after you climax (-:

Dopamine and human growth hormone will crash this party as well.

And more oxycotin and vasopressin means more serotonin and less of the Man Chemicals we’re looking to create in these early morning escapades.

Instead, apologize to your girl…pat her on the butt and tell her a “make good” is coming tonight.

This is a very “Alpha Move”…you made a decision to put her aside for a while, but let her know as you walked away that you’d be back for more later.

If you have even a *smidgen* of alpha superiority in your relationship, she’ll get all tingly between the legs after this exchange.

And this alpha stroke will jack you up in major fashion as well.

Then, when your day is finally over and you’ve already benefited from your post hormonal sex payout, you can give her all the lovin she needs.

And sure, you’ll lose a little bit of that man juice in the process, but it’s part of the package if you want your woman to stick around, because they all NEED this stuff.

But no worries, because morning is right around the corner.

And if you planned and executed well yesterday, your body will be ready to perform again as soon as that sun begins to shine.

And remember all that love you gave your girl last night?

Because of it, she’s going to wake up as ready as you are….because nothing gets a woman going faster than great sex followed up by some good old fashioned lovin.

This one two punch will slay almost any female straight into that blissful, never never land.

And as we both know, when she’s happy…you’re happy.

But, let’s drop the squishy talk and speak like men for a moment…

This affection we’re talking about is good for mating, pair bonding, and stability…let alone the fact that you’ll have a happy female in your presence MOST of the time.

How huge is that?

This is a clean system that will strengthen the pair bonds between you and your girl, which if played right, can lead to some pretty outstanding sex.

So good in fact, that I’ve been comparing mine lately, intensity wise, to the first 6 months of our relationship, which is saying A LOT! (only one arrest and nobody was seriously hurt).

This pretty much sums up the game I’ve been playing lately.

Fewer Testosterone Supplements (2 times a week on average now), because I simply don’t need them as often. (I consider that a huge win).

Intense exercise (EXTREMELY IMPORTANT), clean eating, (JUST AS) sunshine (YUP, THAT ONE TOO) and gaming it in the sex department. (definitely the most fun of them all).

I’ve also been intensely aware of my alpha position relative to my girl, and have been playing off this position mentally, with full cooperation of the wife, (insert affection disclaimer here).

Oh yeah…and if you’re in a bad relationship and aren’t having decent sex once a week, AT LEAST…

You’re dead, because an unsexed, nagged man (if you ain’t having sex with her you’re getting nagged)…is a hormonally sick man.

So don’t drone on in a boring, sexually dead relationship just because that’s the easy thing to do.

It’s your job because you’re the dominate personality in your relationship, right?

She’s waiting, ready and willing, so go make it happen.

UNLESS…you’ve become too beta in your relationship.

If that’s the case, I’m sorry to say that all bets are off.

At least until you regain your alpha status, that is…

The Top 3 Causes of Erectile Dysfunction

The Top 3 Causes of Erectile Dysfunction